Now that 15 Minutes Max is open to high school students as well as those collegiate rascals, we see a lot of teenage talent. One of our youngest filmmakers this year is 16- (thiscloseto 17) year-old Lillian Santacrose. She hails from Guilderland High School and is the co-founder of its Film Club. She and co-president Sean Gordon used to spend lunch geeking out over film trivia and brainstorming ideas for screenplays. “It got to the point where we said, ‘There has got to be other people in this school who want to make films. We can’t be the only ones,’” said Lilly. Hell-bent, she and Sean combined forces, determined to create a film club.

“Lilly and I started the club because we noticed that at our school there was no program for kids who were interested in the non-acting side of film,” said Sean. “We had to write a mission statement and proposal and then it was presented before the school principals. It was approved and we officially became a club.” Not only did they achieve their goal, but GHS also boasts a Film Festival now. 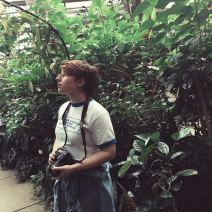 “School Spirit” is the club’s original production and submission to 15MM. Lilly said the film “follows five very different students as they become trapped in GHS after hours with a malicious demon.” Yikes. Wildly humble, she extends credit for the club’s achievement to each student. “Every member put a different piece into the film, from a line to a whole character,” Lilly explained. “I think that’s why we had such a successful first year – everyone in the club created something.”

GHS Film Club advisor, Ms. Best, is the person Lilly bounces ideas off of and trusts to offer honest feedback. “Every artist should have a mentor like her,” said Lilly. “Someone who can guide them but not crush their creativity.” (Ms. Best, if you’re reading this, go ahead and grab a tissue…)

Like many filmmakers, Lilly & Co. struggled with copyright concerns. The rules and laws can be intricate and confusing. 15MM judges will have to determine whether or not “School Spirit” followed guidelines and is strong enough win a spot at the festival in October.

“Our film is brimming with logos and patents and copyright,” said Lilly. “One of the main characters wears a Misfits t-shirt, another two wear clothes with North Face and American Eagle logos. We used the Law and Order ‘DUN DUN’ in one scene.” (Acknowledging the difficulty of sorting through what can and can’t be used freely, the judges and I decided the next post will be about navigating copyright laws. A brief summer-film-school lecture for all to enjoy!)

Sean’s path in filmmaking is already mapped out. “As much as I love acting and directing, my favorite role in the making of a film is cinematographer. That is where I can really be artistic,” he said. “They ways you can manipulate emotion with the camera are amazing. With the right cinematographer it can really change a B-level film to a real work of art.”

Always encouraged by family to express her creativity, Lilly discovered filmmaking combines her love of music, writing and art. When she took a film course last summer at Procter’s, her parents were impressed with their daughter’s work and realized her intention to turn filmmaking in to a career. Lilly’s passion, like Sean’s, lies in cinematography and the depth of artistry it requires.

“More than anything in my life, I want to pursue film,” Lilly said. “I know it’s a very male-centric field and you have to have a lot of connections to be successful, but film is all I want to do for the rest of my life. I will not let anything stand in the way of that.”

I don’t know about you, but Lilly Santacrose just became my new role model.

Signing off for a weekend full of sparklers,